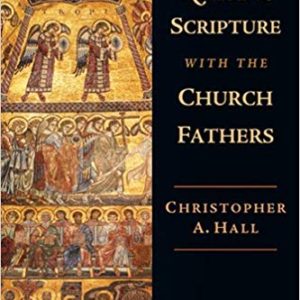 I had the pleasure of receiving three books in exchange for a review. It seems like reviewing books will become a normative part of the website, and so there is now a category for it!The three books that I received are actually a part of a series by Christopher A. Hall surrounding the Church Fathers. This particular review is on the subject of “Reading Scripture with the Church Fathers”. Note: I avoided reading up on Christopher Hall himself to try to keep my review more focused on the text of the book.

The book opens up with a case for why we should read the church fathers and Hall summarizes that we read the church fathers because they are family and that church history didn’t begin with us. He writes to primarily to protestants, it seems, as he points to Luther and Calvin who engaged with the church fathers at the dawn of the reformation. Hall makes very valid points in his opening chapters regarding the modern evangelical tendency to reflect ideology from the enlightenment or postmodernism, which basically results in “solo scriptura”. I found this particular section to be a breath of fresh air as he points out how hermeneutics and church history have been affected by these ideologies (albeit, briefly). Hall also challenges the protestant’s fear of tradition as he notes on page, 31, “The deep-seated protestant suspicion of tradition and its confidence in the ability of renewed reason alone to understand scripture will lead many to shy away from investing time and energy in exploring patristic thought, believe it better to focus on the world of the bible.” While such commentary from Hall seems irrelevant to the contents of the book, I found it to be refreshing in that Hall tells Christians to step out of the comfort zone of their non-tradition, “tradition.” In retrospect, his presentation before the ‘core’ material is appropriate given that Hall preps the everyday Christian to understand that the Church Fathers differ from themselves, and then moves onto the primary sections of the book. When introducing the Church Fathers, Hall briefly discusses the important women in church history, and while some other reviews charged him with being “politically correct” in doing so (because of his saying that there are church mothers) I didn’t catch that vibe when reading the book. It seems as if Hall wanted to merely point out that there were many faithful women in the church who were admired by others.

This book focuses on how some major Church Fathers viewed, interpreted, and utilized scripture. It also gives you insights into the thoughts and world in which the early church operated to some extent. You see the diversity of personalities, and viewpoints, and realize that while there are differences, we have a lot of similar struggles. It is a fascinating read as Hall goes into “Four Doctors of the East” and four Doctors of the “West”, highlighting the different contexts in which each father operated. He provides brief biographies, circumstances, goals, and roles of the church fathers he has selected to show how they viewed and used scripture. After going through the eight fathers he chose, he explains the exegetical tendencies of Alexandria and how those in Antioch responded. All-in-all, the meat of the book is one of insight into the minds of the eight fathers he provides and this book becomes a helpful pre-requisite into reading and understanding the church fathers when examining their writings.

One thing that I did notice, which is probably the only negative of the contents, was what looked like advocacy for unity between Protestants, Eastern Orthodoxy, and Roman Catholicism. What I mean is that within the book, Hall discusses how each one views the Fathers and tradition and makes the point that we should all tolerate tradition so that we properly understand where others are coming from. While Hall points out errors in Roman Catholic teachings here and there, he doesn’t seem to separate himself from them. The issue I had was that this toleration was never fully explained and thus, from my perspective, could have been seen as “we should be united despite our important doctrinal differences”. This, I believe, plays into what is called Proto-Orthodoxy, which Hall introduces briefly in the beginning of the book. Given that I haven’t looked into proto-orthodoxy yet, I haven’t had time to evaluate or assess it.

All in all, if you’re new to church history or the church fathers and wanting to enjoy the world of the church fathers and learn more about them, this book is for you. You will be challenged and stretched while growing in appreciation of those who have been faithful Christians long before our time! You won’t agree with everything you read, which is to be expected, but I think you’ll appreciate the read regardless. It is a good primer, though, will not be exhaustive. As one who has read a fair amount of church history, the contents were not particularly new, but a bit more in depth. I highly recommend Christians still check out this work and become a bit more familiar with the “family of faith”, even if perhaps you are familiar with church history.