Worshiping with the Church Fathers 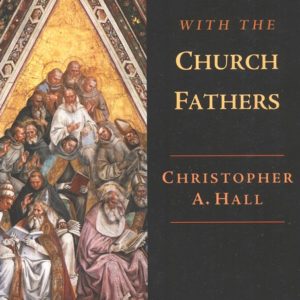 In today’s post I am wrapping up my reviews of the three books that I received by Christopher A. Hall surrounding the topic of the Church Fathers. This volume, is volume three, I believe, and deals with the topic of Worship, “Worshiping with the Church Fathers.” Much of my review is actually similar to my last two which you can read here and here.

The negatives of the other two volumes remain, that is, toleration (or acceptance) of Rome. This section is worth placing within this review: “As I said in my other review, one thing protestants will note is Hall’s consideration of Rome to be brothers in the faith, to which, we would disagree. Such a negative can be ignored, but it is worth noting given that some may purchase the book through my recommendation. Hall’s continued narrative of encouraging Christians to step out of their theological comfort zones to understand others, however, remains admirable. Even when it comes to discussing with Rome, it is best to step out of our comfort zones and try to accurately represent and understand their positions. It is worth admitting that I still haven’t looked into Hall and thus my picture of Hall is only seen through his references to individuals such as Thomas Oden and what he says in his books. That being said, every so often there is something said, that I would disagree with, yet, I it would be quite rare to find a book where everything lines up with my beliefs.”

Unlike the other books, where my primary negative was the views of the author, I found this book to be wildly disappointing given the subject matter. Hall addresses worship, specifically the importance of baptism and communion, discussing the views and writings on the matter. Though, his interaction with structure of church worship and other subjects such as the role of scripture are lacking. It could be argued that the book doesn’t necessarily need to be about worship within congregations, however, that is what I, personally, was hoping for. He spends a good amount of the book on prayer and the “desert fathers.” They are interesting in their own right, no doubt, however I felt like this was a little out of place. Prayer was fitting, as a mode of worship, but the book felt like it was lacking. This alone makes me shift down my rating. The two chapters that deal with worship (on communion and baptism) are well done and Hall covers significant ground that will challenge most everyone. You will be stretched to think through historical circumstances and the writings of the church fathers. The remaining chapters on prayer and the desert fathers were good, but I particularly lost interest because of how those chapters deviated from the subject of the book. I think that Hall would have done much better to cover the writings that deal with how church services operated, perhaps pulling from the Didache or Justin Martyr.

The conclusion of this volume is nearly same as the previous: if you’re new to church history or the church fathers and wanting to enjoy the world of the church fathers and learn more about them, this book is for you. You will be challenged and stretched while growing in appreciation of those who have been faithful Christians long before our time! You won’t agree with everything you read, which is to be expected, but I think you’ll appreciate the read regardless. While it is a good primer it will not be exhaustive. As one who has read a fair amount of church history, the contents were not particularly new, but a bit more in depth. I highly recommend Christians still check out this work and become a bit more familiar with the “family of faith”, even if perhaps you are familiar with church history.