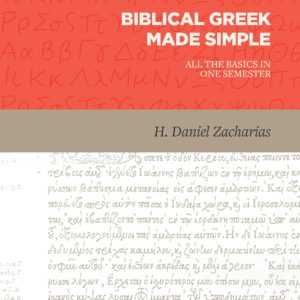 I was privileged to receive the book “Biblical Greek Made Simple” for free in exchange of a review (whether it be negative or positive). The book is put together by H. Daniel Zacharias, with the goal of getting all of the basics of Greek into the hands of the reader in one semester.

In the beginning of this Greek Grammar, Zacharias points out how his work is different from other grammars. These differences consist of the following: being designed for 12-weeks of self-learning opposed to typical two semester grammars, interaction with Logos Bible Software, a different approach in learning the material, and a “second time around” section. One thing that immediately stuck out to me about this book was its size, which I found extremely appealing. When comparing the book size with Mounce’s grammar, the size difference is significant, and that is a positive right out of the gate.

Another feature that stuck out to me was Zacharias’ use of a color system to indicate various functions in a sentence and to show the way case endings work. For example, when explaining the noun system Zacharias uses blue to indicate the subject of a sentence and red to indicate the object of a sentence. When explaining the case endings of nouns, he moves those color codings to the case endings themself allowing the reader to see the stem (in standard black font) with the color coded endings (such as blue with the nominative case ending). I believe this type of system to be extremely helpful for seeing and understanding what is actually happening in the greek language. I really appreciated that effort and think it will be beneficial for those who are trying to “see” what is occurring.

One negative, which comes with the territory of being an “express” course, is the amount of information in each chapter. I read through a chapter and thought that it could easily be overwhelming for a new learner on the subject because of the amount of information. I would throw in the disclaimer, however, that in my own studies the chapter divisions are significant for me mentally, which is something that others may not have an issue with and so this negative is highly subjective. An additional thought on this particular critique is that I am comparing this grammar with two others which were not designed for a 12 week course. This being said, the user of the text can still move at their own pace.

Within the chapters there are various sections with Youtube links to supplement what you have learned, which I found to be fascinating and a truly great utilization of technology. I think it is a great idea, however, searching for the videos in that format can became tedious and I would be curious as to what would happen if a video was removed for any given reason. For the former issue, this is easily taken care of by simply being subscribed to the channel. For the latter, I’m not too sure! Perhaps future editions can come with a disk with the uploaded material just to be safe.

I did find the built-in workbook, so to speak, to be a nice addition worth praising. Instead of having to buy a second book, Zacharias was kind to insert practice work directly into this grammar. One other thing worth noting, since it is a unique feature of this grammar, is the utilization of logos. While I am an Accordance user, I found the usage of Logos to be a good direction to take. Rather than shy away from the inevitable use of Bible Software, Zacharias helps learners of the language understand what is happening in their software. I honestly think this is a very important and intelligent step to take! I haven’t tested all of activities with Accordance, but I would imagine that said activities could be accomplished if one got to know the software well enough. Perhaps an updated edition of this book could include tips on using accordance as well as logos. This usage of logos does present one draw back – you need logos (or at least some type of bible software) for some of the activities. This does limit the book’s over all “accessibility” to a small extent.

All-in-all, I think this grammar is very fascinating and presents information in an understandable manner that is engaging in a variety of ways. I think the utilization of technology was a smart and unique move on the author’s part, which I am sure will benefit the student going through this book. I think for anyone considering a greek grammar, especially if wanting to tackle greek in 12 weeks, would benefit from this book. I would recommend it. One last note in passing is that the cover is just visually appealing, which is also a plus for me!