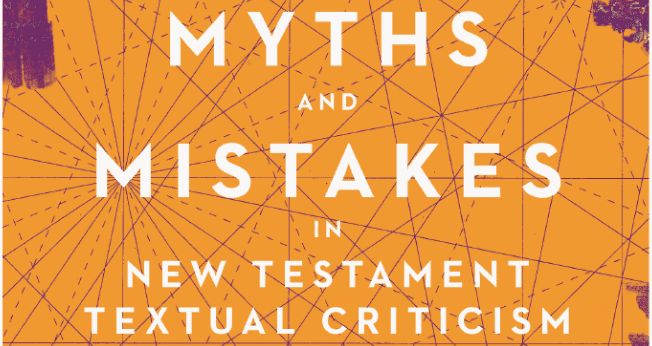 I had the pleasure of receiving, “Myths and Mistakes in New Testament Textual Criticism” for free in exchange for a review and I will start off by saying, this book does not pull punches and it does not disappoint.

The bible is quite remarkable and because of that we often see the facts of the bible used in apologetics. As an example, when comparing the manuscripts of the bible with classical works we can see how amazing the bible’s preservation is. The New Testament has 5800 Greek manuscripts and Caesar’s Gallic Wars only has 10! Or Homer’s Iliad? It only has 643! It sounds fantastic. So fantastic that it has been republished over and over again to this day. The problem is that it isn’t accurate any longer. Caesar’s Gallic Wars has at least 251 manuscripts to date and Homer’s Iliad has 1,900 plus. Not only this, but the number of Greek manuscripts (5800) is wrong, and misleading in many regards! The fundamental argument for comparing the New Testament with Classical works rings true – it is amazing how many manuscripts we have, but it is typically built upon old data that needs to be updated if we are to have integrity in apologetics. Myths and Mistakes in New Testament Textual Criticism takes many examples used by apologists and corrects them for this very purpose.

Within this book we see various popular views and presentations challenged, in great detail, and with great explanation. Not only are claims of skeptics addressed, but claims from apologists are addressed. This adds an amazing objective element to the book. Some examples of topics this book covers consists of myths about the autographs, how many manuscripts we have, myths about copying, myths about variants, and even myths about translations. Each chapter makes it clear what will be addressed, it puts forth argumentation, and has a key takeaway section. Within the chapters we also see ideas and suggestions put forth on how to better use textual criticism in apologetics, if at all, and how to avoid being dishonest in our apologetic encounters.

The importance of this book is hard to stress given the amount of works producing copies of the myths presented. If you take for example the point I began with (Classical works compared to the New Testament) you can see this on display. Looking at my book shelf, I have four apologetic books that contain this myth, all of which are fairly recent. Not only that, but one of them was a book I used in undergrad and have on my recommendation page, “From God to Us” by Geisler and Nix (it is still a good book except with its employment of some of these myths). When you google something along the lines of “New Testament manuscripts vs classical works” or “the historical reliability of the New Testament”, you’ll find a plethora of images and articles putting forth old information. Not only that, but some of the best apologetic websites out there are putting up this information. Why is this a problem? Simply put: Integrity and Credibility. When reading through this book I had realized that I had also “regurgitated” some of these myths, and as I was being corrected, I realized how many like me probably have this information in their heads because of how often many of these myths and mistakes have been republished.

Myths and Mistakes should be read by all pastors, ministers, or apologists who are informed in textual studies. It should also be read by anyone seeking to better understand textual criticism and employ it in apologetic discussions. Not only will you leave this book with corrected mistakes, but you’ll leave with the same assurance regarding the text of the New Testament as well as more information about textual criticism. All in all, this book is great, and it will be added to the book recommendation page.