The Whole Armor of God Review 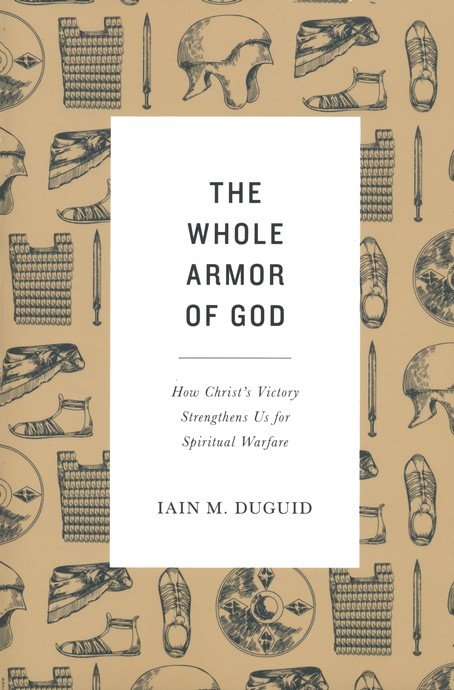 I had the privilege of receiving “The Whole Armor of God” by Iain M. Duguid, which is published by crossway, in exchange for an honest review.

So, we’re reviewing, “The Whole Armor of God: How Christ’s Victory Strengthens Us for Spiritual Warfare”. My initial reactions to this book was “wow, this is short!” It sits at 117 pages and has standard size font, which means that you can get through it rather quickly if you are a moderate reader. While it is short, it is packed, and so you won’t regret reading it and like me, you’ll likely want to read it again. Not only that, but each chapter has some questions for reflections. This means that this book, given its length, and questions, would be fantastic for a manageable small group study.

The book seeks to explain the armor of God and it seeks to be practical in our understanding of the armor of God. This is to say, rather than being hyper-spiritualized (as many works on the armor of God are) it stays grounded while retaining the spirituality of warfare. This is much appreciated especially when the author points to the armor of God as essentially “living in Christ”, though, I don’t believe he summarized it that way himself. He takes approaches that are not only appropriate but also refreshing. For example; much of the text makes connections with the Old Testament. Duguid shows the connections of the Old Testament to Paul’s remarks on the armor of God and really this just seems more “right” in the midst of other expositions I have heard and read. Alongside this, he focuses on Jesus’ walk in this world, pointing out that Jesus walked this walk so that not only is this armor God’s armor given to us, but also that Jesus in the incarnation wore this armor in his life.

Surprisingly, this little book is theologically deep, and worth pondering over, and there were many times where the author would make a statement and I would think, “of course!” That makes sense and I should have known! Not only this, but this little book is very practical, more so than other treatments I have read and it really gets you seeped into the gospel.

If I had to critique the work, I would say that the author could have spent a little more time explaining the powers of Satan in the Christian life, and how he connects to our flesh and to our understanding of God’s plan. Perhaps this was just beyond the scope of the book and perhaps it is better to just focus upon the armor itself, but it could have enhanced the book altogether in my opinion.

All in all, this little book was good, and I’m lending it out because of that. I’ll also be re-reading it assuming I can get it back from my friend as there was a good amount to chew on despite the length. The centrality of the Gospel and Christ in light of the Armor of God is truly the strength of this book and I found that you’ll be hard pressed to find a more biblically “grounded” book on the subject. Worth noting again to that given the book’s length, and questions, it would be fantastic for a manageable small group study. Not only this, but it is very reasonable in its price!