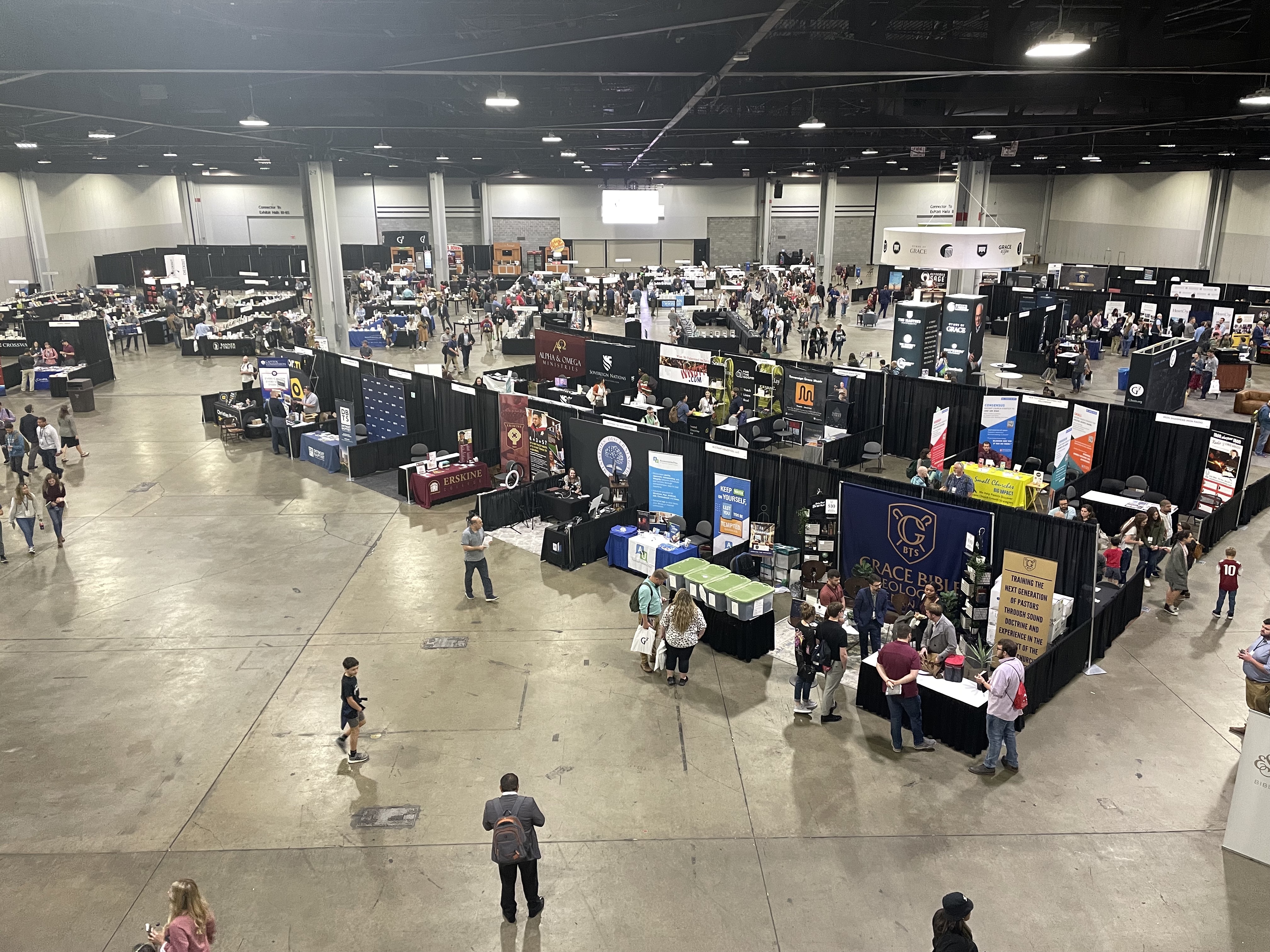 Last week I was blessed and privileged to attend the G3 conference on the doctrine of Christ (see the details and who spoke here). The time in Atlanta for this event was well spent as I had the blessing of creating memories with a lot of friends and meeting a lot of new people. The Lord certainly encouraged me and reignited my zeal by means of friends, worship, CITC listeners saying hi, and the messages being shared by the speakers. The speakers were excellent, a group of men who are exceptionally gifted with the exposition of God’s word, and their messages were equally excellent, convicting, and moving. The venue was impressive as well, though, as with any event, there has to be griping over the price and quality of available food while, for whatever reason, Atlanta had itself a very bizarre assortment of schedules for its restaurants. This, of course, is really of no fault of G3, that is just how things go with any event, especially ones hosted downtown in a major city.

This all said, the title of this article is “A Critical Review of G3 2021” and so you’re probably wondering where the critique is. I would be dishonest if I didn’t say that it makes me a little uncomfortable to write up this review with my thoughts as I know that many were blessed by the conference, including myself, and such a critique could seem ‘overly critical.’ Additionally, I know that such a critique won’t be the most popular because of the excellent speakers and experience, but I am hopeful that it will be of benefit in some shape or form. To that I say, I do think that overall the conference fell a bit short in regards to its contents and focus. Before pressing into why, I want to stress (yet again) that the messages and speakers were excellent and blessings that, without a doubt, edified the body gathered. Josh Buice and the G3 team did a fantastic job with the entire lineup, and organization. I also must say, worship at G3 was one of the highlights for me, there is something special about singing God glorifying music with thousands. This is all to act as a qualifier to emphasize that while I think G3 had a lot of room for improvement, and my explanation of such could seem ‘overly critical’, it was a great conference that I will always remember. I have critiques, but I loved the conference.

So, what are the critiques? I think it would be best to begin with the lesser point, that is, that the conference was made up of sermons on particular texts. While the topic for each session was focused (though some topics were changed), exposure to said topics weren’t very in depth. This is expected, however, because of the nature of the sessions, a sermon that focused upon the particular text chosen to exegete. I would contend that conferences are better with and the right place for deep theological lectures (and I’ll connect this to the theme of G3 in a bit) opposed to sermons that the body can find in their local churches or online if they desired to hear a particular pastor. I wouldn’t be sharing my full opinion if I didn’t say that it is strange to me to pay to hear pastors preach sermons and shepherd a body that isn’t theirs. That was one aspect I enjoyed of G3, that is, they emphasized the local body and the importance of an individual’s providential pastor and elders, yet, undoubtedly and unintentionally G3 had conflicts with this by providing an event to hear other pastors preach sermons.

If I am even more honest, I have gotten to the point in my life where the only sermons I really listen to are within my local congregation and so I found myself at odds with the style of the conference at the beginning. This is a good point to go back to my first point, I believe these conferences would be much more worthwhile if they put together robust theological lectures that are typically less accessible to the general public rather than sermons that could be preached by a pastor in a local church. In summary, I think this would be more helpful in three ways: It would equip the listeners with information that is not as easily attainable, it would remind listeners that their shepherds and pastors are their pastors and they prepare sermons as such, and listeners would get their money’s worth for the price of the conference. There are other benefits to this that I could mention, but they distract from the article and so I digress.

In regards to the content, the sermons were excellent no doubt and edifying (Paul Washer, in good old fashion cut the heart with a knife), however, it is my conviction that they weren’t as beneficial in the long term as they could have been. To the theme first: the conference’s theme was the Doctrine of Christ, and while much of Christology was mentioned in term (usually assumed or mentioned in passing), the focus for the most part seemed to lean in on the work of Christ and application. Much was said on the atonement (more than anything else I believe), and there is no doubt that the work of Christ is important and should be understood properly yet I found this emphasis a bit odd. Additionally, much was said at G3 about the different versions of Christ: the progressive Jesus, the mere-good-teacher Jesus, the Jehovah’s Witness Jesus, the word of faith Jesus, etc, yet these were mentioned in passing and with broad brushes with little apologetic against them. It was only, as I recall, James White in his exposition of Colossians, that offered solid, and helpful, apologetic points against the Arian Jesus of Jehovah’s Witnesses. I would actually put money on it and say that a good number of the attendants wrote down said apologetic for future reference because of its usefulness

This is all to say that I can’t help but wonder how much more helpful it would have been to have sessions focused on the systematic categories of Christology in a more wholistic approach along with historical considerations and apologetic sessions. While much was said regarding these variants of Jesus, I don’t feel as if the attendants left with tools to do what they were exhorted to do – proclaim the true Jesus to the world. Of course, as Steven Lawson pointed out in the Q&A on the difference between teaching and preaching, there can be overlap, and I think this would have been the best approach. Give robust theological sessions and show them how it can be applied and why it matters. This would; 1) Solidify the importance of theology, 2) show that there are historical and exegetical responses to variants, and 3) equip the attendants to engage with the plurality of false Christs in their day to day. In this way, what the listeners learned would stay with them, and effect those around them as they demonstrate what they learned and put it into practice. Instead, the approach of a sermon based conference leaves them with personal edification that can affect others, but only insomuch that the individual is already equipped. It is true that some of the sermons contained information, but such information was limited to a particular text, which is hardly sustainable in creating a firm foundation on a doctrine found throughout the bible.

When considering the sessions and the theme, I kept thinking of examples; why not spend an entire session walking through the deity of Christ and properly equipping the body to defend it? Why not have a session discussing the proof texts of the “social justice Jesus” and why, exegetically, they are not viable? Why not have a session that discusses the much elusive concepts of Kenoticism and the nuance of functional and ontological kenoticism? Why not have sessions dedicated to the historical Jesus or even discussions showing the development from Nicea to Chalcedon to demonstrate that many heresies have been dealt with? To that, why not have a session that merely expounds on orthodox Christology put forth by the Chalcedon definition, which often escapes Christians? I believe there is a large pool to pick from, and so I digress for the sake of not being redundant.

I’m not sure what the breakout rooms looked like aside from one I’m familiar with and another I was able to attend, but they were good examples of what I would hope to find at a conference. The first being Justin Peters who leaves his listeners with information that is helpful and eye opening. I have no doubts that such information will ripple and effect local bodies causing theological and critical reflection. The other breakout, the one I was able to attend, was Chip Thornton’s on infused vs. imputed righteousness, which is a crucial discussion for understanding the debate during the reformation and the divide between protestants and Rome today. These both offered more, and likely new, information that will be applicable in future theological discussions and thus prepare the listeners to better engage and defend an orthodox view of Christ.

In summary, it is my belief that the theme of the conference and what I, personally, expected from the conference fell short. I know that the latter is subjective and so you can consider this critical review as much of an apologetic for a particular expectation for conferences if that seems more fitting. The conference’s goal was to teach who the person of Christ was and the advertisements for the conference gave me the impression that the conference would discuss the issues of the variant Jesus and equip believers with tools to properly engage the world and their variants. My critiques all aside, the Gospel was preached, people were convicted, zeal renewed, hearts filled, and this will still have an impact on those who attended