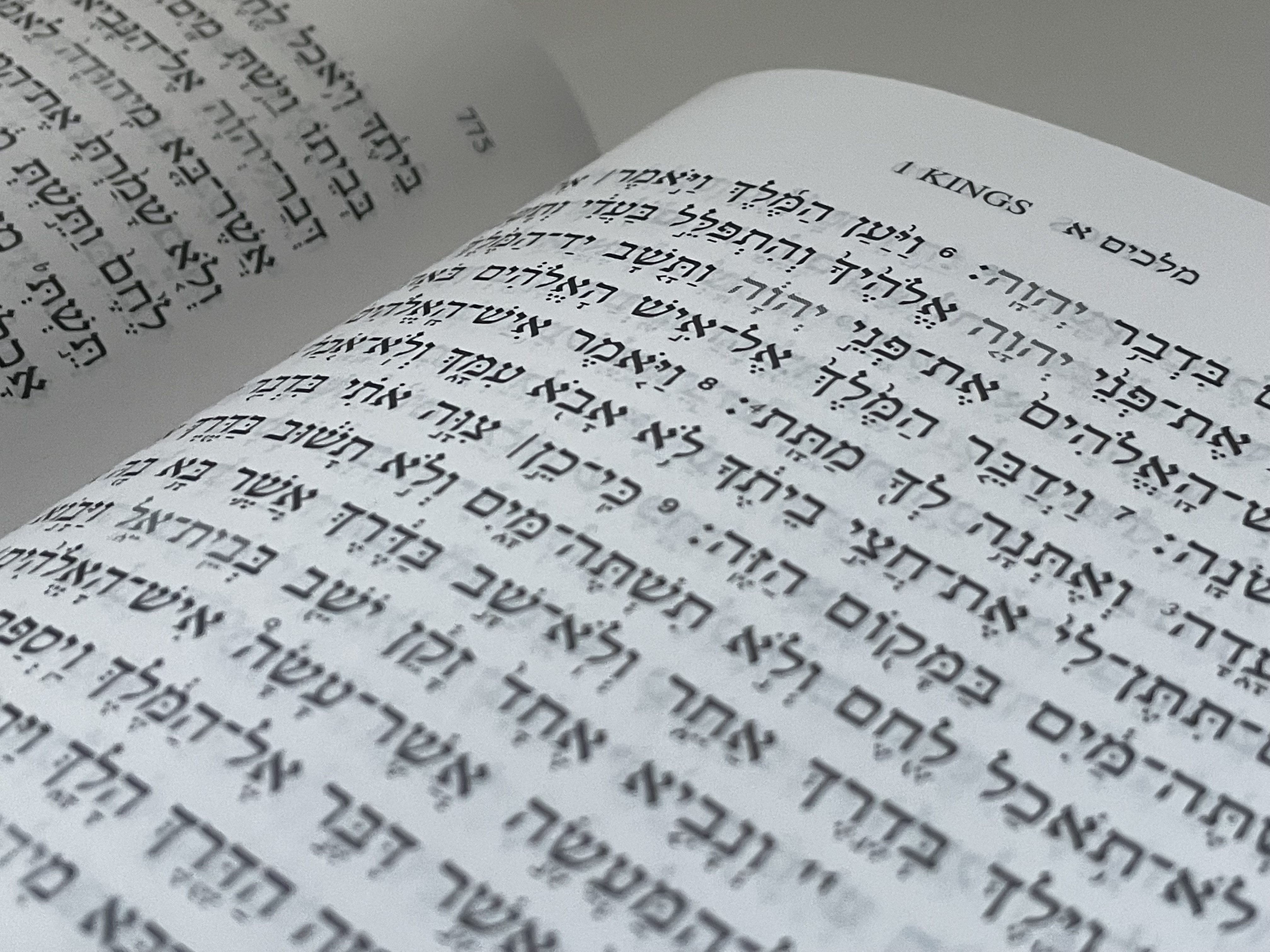 Why Consider a Reader’s Edition?

A reader’s edition is a great tool for a beginner or intermediate student. Because the Hebrew Bible has such a large corpus of vocabulary compared to the Greek New Testament, being able to consume large amounts of texts comfortably is difficult without one. Studies have clearly shown that retention is improved when reading a physical book compared to using an online tool like a Bible software program,[1] and I find it more enjoyable as well. On top of that, a reader’s edition does not provide you with all of the answers like a software program might, which can push the user a bit more in his or her language skills. Reading large amounts of texts may be the most underrated tool in learning the biblical languages. It is a great way to learn and review vocabulary in context, learn and review syntax, and develop intuitions about the language all at the same time. When a certain level of proficiency is reached, nothing is as simultaneously rewarding and beneficial as spending time in the text. A reader’s edition is a valuable and enjoyable tool for anyone serious about progressing in their language skills and studying the Bible in depth.

Like Biblia Hebraica Stuttgartensia (the standard Hebrew Bible), this volume uses the Westminster Leningrad Codex. Kethib Qere are both included. Glosses are given at the bottom of each page for words that occur fewer than 75 times in the Hebrew Bible. Choosing the number of words to define is not easy. Include too many and the reader’s edition becomes too much of a crutch for the learner or it simply has to compromise on either aesthetics or information because of the amount of space needed for the glosses. Choose too few and the reader’s edition is not actually an effective aid and large amounts of texts cannot be read in one sitting. Many have opted to include words that occur less than 100 times while sacrificing the amount of information given. I think Crossway made a fantastic decision at this point. Including words that occur less than 75 times requires the reader to have less than 500 Hebrew words memorized, which is very reasonable. If a student is struggling to remember one of these words, a dictionary is available in the back providing a gloss for those as well. Words that occur 10 times or less in Aramaic are given a gloss at the bottom of each page, which leaves less than 100 Aramaic words to be memorized. An Aramaic glossary of frequent terms is available at the back of the book as well.

Unlike many other reader’s editions, for each word that is defined in the text itself, the lemma is given along with morphological parsing. The glosses given are noncontextual, meaning the typical gloss given for a word is always provided rather than simply what best fits the context. If multiple senses of a word are common, the meaning that best fits the context is included first. This is another example of a great decision by the Crossway team. Reader’s editions which only include glosses of the meaning in context can end up interpreting the passage for the reader. I also grow frustrated when contextual meanings alone are included because I find myself looking up the word to make sure the sense I have in my head (often the most frequent sense of the word) is also a correct gloss, and to see all possible meanings of a word. Having these included when words have a variety of senses is very beneficial. The gloss given is also specific to the particular stem of the word (Qal, Niphal, Hiphil, etc.) Part of speech is included, along with gender and number for adjectives, nouns and verbs, information on pronominal suffixes, whether the word is in the construct or absolute state, and more. Proper and gentilic nouns are written in gray font for easy identification. For verbs, Groves Carter’s Westminster Hebrew Morphology version 4.2 is used[2]

The book is aesthetically pleasing. The black cover with gold lettering is sleek, and the smyth-sewn binding should hold up to wear and tear. The text pops off the page very well. The font is fairly large (13.5-point), and much more readable than my BHS volume. Letters that look similar and may be confusing to a beginner are clearly distinguishable in this font.

The editors did a great job with the sizing and style of the footnotes inserted in the text. The point of a reader’s edition is to get you reading the text, avoiding having to stop to look up words constantly. In this respect, I have found that some readers editions insert large footnotes into the text that are impossible to ignore, and almost demand that you then turn to the footnote on the bottom of the page. Growing dependent on the footnotes can lower your confidence and stunt your growth as a language learner. In this volume, the footnotes are clear but are not overly distracting, so that when words are known already, I have not found myself automatically glancing down as I have with other reader’s editions. I am also thankful that the footnote numbers start over at “1” at the beginning of each page rather than each chapter in the Hebrew Bible, so that you do not have to turn back to a previous page to look up an infrequent word that was already used in the same chapter.

Due to the readable font size and amount of information included, the book is a fairly large (6.7 x 2.5 x 9.6 inches). I do wish it came with a page marker attached as well. Yet overall, it is visually appealing and very user friendly.

The Crossway team has done a fantastic job with this volume. Having used it for several months now, I am beyond pleased with it. It has been a personal blessing for me, and I whole-heartedly recommend it for any student of Biblical Hebrew.

[1]See, for example, Anne Mangen, “Comparing Comprehension of a Long Text Read in Print Book and on Kindle: Where in the Text and When in the Story?,” in Frontiers in Psychology, January, 2019, https://www.researchgate.net/publication/330221062_Comparing_Comprehension_of_a_Long_Text_Read_in_Print_Book_and_on_Kindle_Where_in_the_Text_and_When_in_the_Story.

[2]In Hebrew, parsing terminology varies in different systems. I am not an expert on all these systems, but much of it comes down to semantics and is intuitive. In this system, the terminology waw-consecutive imperfect (wc impf) is used for forms elsewhere called the wayyiqtol or preterit form, and “waw-consecutive perfect” is used for what is elsewhere called the weqatal form. For an argument against the term “preterit” for waw-consecutive imperfect/wayyiqtol, see Elizabeth Robar, “Wayyiqtol as an Unlikely Preterit,” in Journal of Semitic Studies 58:21-42, 2013. Weyyiqtol, also called the conjoined imperfect, is simply referred to as a Qal cohortative or jussive.

Logan grew up in San Antonio and has been married to his wife Caitlan since 2015. They have three children, Hazel, Baker, and Shepherd. He graduated from the University of Texas in 2016 and is now working on a Master of Divinity at the Southern Baptist Theological Seminary with supplemental classes at the Hebrew University of Jerusalem. He has a passion for the biblical languages and biblical theology. Logan serves as a Student Pastor at Currey Creek Church in Boerne, TX.