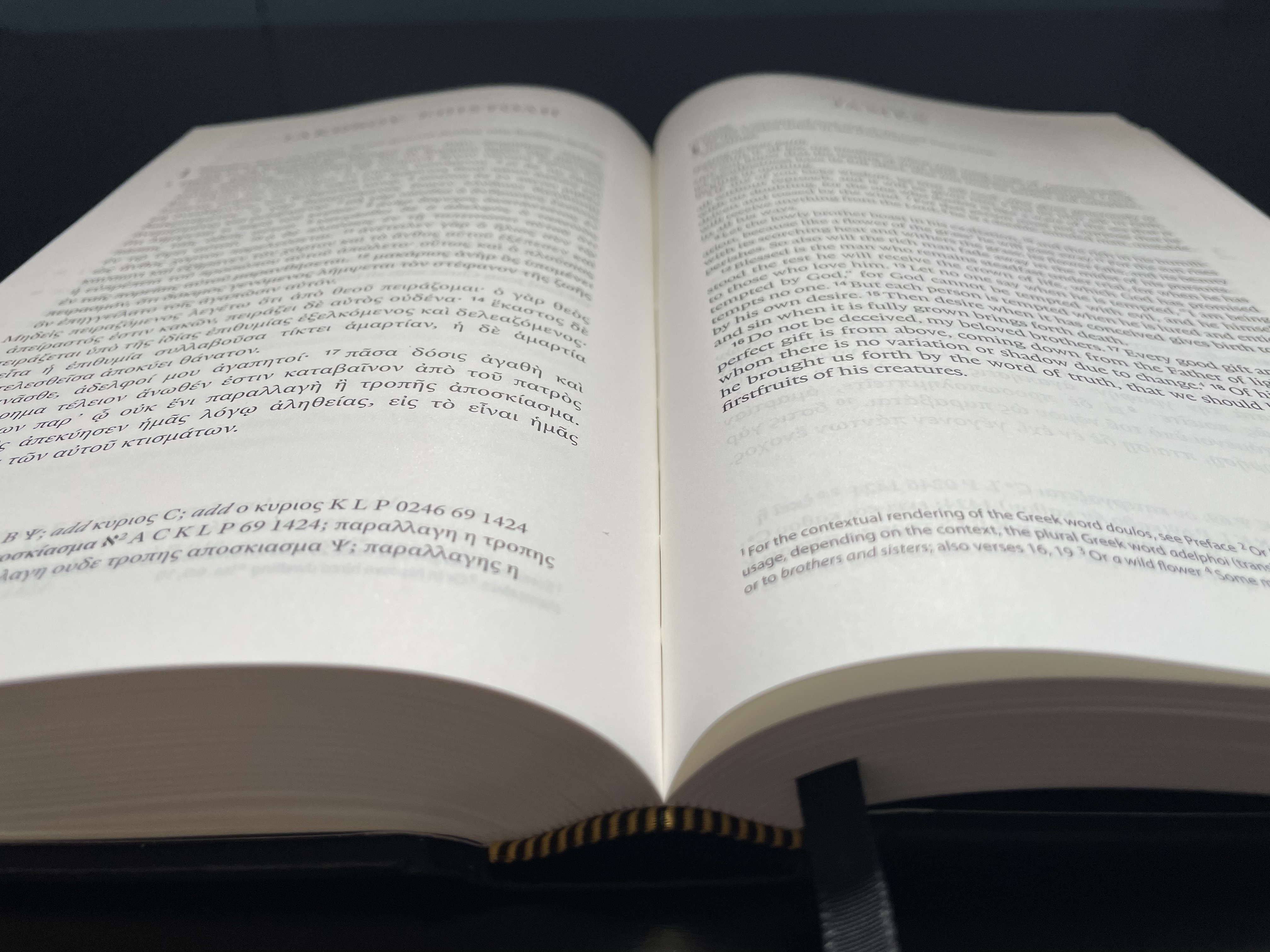 Today I have the pleasure of reviewing The Greek-English New Testament put out by Crossway. This particular review is actually long overdue as I meant to put it up much earlier than today. However, such a review was delayed given the busyness of life. Why mention this? Well, when I sat down to review this book it dawned on me that I had been using it a lot over the last six months and thought that was particularly noteworthy. I’ve had the book for a decent amount of time now and sometimes those long-term reviews are more helpful for a work you may or may not use long term.

So, what is this book? The diglot, Greek-English New Testament, is a book where you have the Greek text on the left page and the English text on the right page. In this particular volume you have the Tyndale House Greek New Testament and the English Standard Version. Both of these particular texts are spoken of and reviewed quite extensively online and so we won’t speak to that particular issue except where it was noticeable for me. If you’re interested in a more technical discussion on the Tyndale House Greek New Testament text, check out Bill Mounce’s review here and Daniel Wallace’s thoughts here.

Right out the box, purchasers of this volume will find that the book order of the New Testament is different than their typical experience. In fact, I must admit, the book order still throws me quite often when I open up this particular book (granted, I could in more effort in simply noting the arrangement). The reason is that the Greek-English New Testament (GENT from here on) follows the Tyndale House Greek New Testament (THGNT) book order. This is explained in the introduction to the Greek New Testament in this volume, but in short, the book order reflects an older pattern in ancient manuscripts of putting the Catholic Epistles after Acts and the Pauline Corpus after those epistles. So, the order you will find is: Gospels, Acts, Catholic Epistles, Pauline Corpus, and Revelation.

Ultimately this book order will be inconsequential once you find the book you’re wanting to read through. Another point where a Greek reader will need to adjust will come up every so often with alternate spellings of particular Greek words, which also seeks to reflect older manuscripts of the Greek Text. Without going into this detail, as many others have, it is something that is noteworthy at least in brief.

In this edition the print size is excellent, and the format is excellent as well. It is truly a really comfortable edition to sit down with and read through, and in almost every way. The print that I received is a hardcover, which is not my preference, yet I found myself using it quite often. It lays open flat, fits comfortably in your hands or in between your arms with a laptop in front of you, and the text is just easy to see. The ghosting is the largest drawback, as with most bibles, but it is something that you get used to or already are used to. The pages are a bit thicker than your standard thin line, but still thin enough that I wouldn’t want to take notes in.

So, the question is; why would I want a Greek and English text side by side? Honestly, debates abound as to what the Greek student should and should not use. Typically, however, I have found most saying that the use of such a volume is significantly better than an interlinear. The fear, or problem, is that having an English gloss so easily accessible will turn into a crutch for the student of the Greek New Testament and they will ultimately hinder their learning. I can certainly attest to such an experience with an interlinear at this point in my life, and I can say that a book like the GENT could indeed become that as well. So, the question really is, what do you want to use it for? My personal use was taking the Greek Text, translating it, and then comparing it to the ESV (and of course for good measure, other English texts as well). This would be both in technical settings and in devotional settings, but I worked through the Greek first without the aid of the ESV. This ultimately would be the benefit of the book for me today. I could read through my Greek reading of the day and supplement it with the ESV afterwards without needing multiple volumes. At this point, then, the question for the buyer is, what are you hoping to get out of this volume and if you are a Greek student who fears this could become a crutch for you, I’d recommend picking up a different edition (perhaps a reader’s GNT). Of course, I have heard of Greek students who simply cover the ESV side with a piece of paper when focusing on the Greek New Testament and using that paper for their translation or parsing so that they aren’t tempted to peek.

This all said, the book is fantastic, and it is comfortable and readable. What determines whether or not you want to pick it up is ultimately based on what you are wanting to get from it and what your long-term goal is. Generally, then, I would recommend it. I used it quite a bit, more so than I imagined, and that (for me) is a good indicator of a product’s worth.

Pick this edition up here on amazon.